Home » Health Information for the Public » Educational Campaigns & Programs » We Can!® » Partner With Us » Local We Can! Community Programs » Case Studies » Scott & White Memorial Hospital and Clinic

The Children’s Hospital at Scott & White is the largest multi-specialty practice in Texas. As a part of its prevention efforts, it is an active partner in the Tem-Bel Health and Wellness Coalition, a group of Central Texas community leaders committed to developing comprehensive, school-based health care and health education initiatives to promote children’s health. As part of We Can!®, the Tem-Bel Health and Wellness Coalition is offering CATCH Kid’s Club, Media-Smart Youth®, S.M.A.R.T., and the We Can! Parent Curriculum through schools and youth and recreation centers. 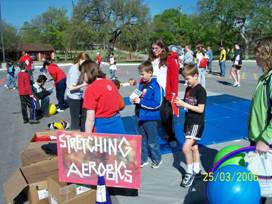 Scott & White drew on the strengths of partnerships formed through the Tem-Bel Health and Wellness Coalition to participate in four community events that attracted over 800 attendees.

These sites helped generate local media coverage that contributed to the two awards that Scott & White and the Tem-Bel Health and Wellness Coalition received for their efforts in implementing We Can! programming. These events included:

The site worked with the Scott & White media and marketing departments to design posters and fliers that could be put up in the schools. The site submitted an article for the Belton Journal and was featured in an article in the Temple Daily Telegram.

University of Mary Hardin-Baylor provided staff support, financial support to purchase T-shirts, and facilities for events while the Ralph Wilson Youths Club provided materials, supplies, and assisted with flier distribution. Central Texas Housing Consortium, a government agency and the only non-coalition partner, provided a location and recruited an audience for the parent classes.

The Tem-Bel Health and Wellness Coalition attempted three implementations of the six-lesson We Can! Parent Curriculum and received positive feedback from the participants regarding messages and materials.

Participants met once a week for six weeks during the two implementations at Scott & White University. These implementations were advertised through an employee-wide e-mail and usually took place during lunchtime so employees could attend. Most of the participants attended every lesson.

The Tem-Bel Health and Wellness Coalition also modified the curriculum for the implementation at Central Texas Housing Consortium by combining all the lessons into one 4-hour session with a meal break. DSHS (partner) provided speakers.

The implementation staff found the parents ability to put the lessons into practice improved over time. As they described it: "When I taught the parent classes for Scott & White University, every time the participants came in they would list the changes they had made in their diet or exercise over the past week on a large note pad. The people who attended the class were always talking about the things that they had done differently and the changes in their diet. They had begun buying different foods and taking the stairs more often, basic changes like that. At first they didn't write much on [the notepad] and as the program went on more people would write more things. So, I think that was really encouraging."

At the end of the We Can! Parent Curriculum, parents reported stronger positive attitudes toward the ease and importance of engaging in energy balance, and in choosing a diet higher in fruits and vegetables and lower in fat and sugar. Parents also said they more often read nutrition labels, ensured that foods high and fat and sugar were not easily available at home, and controlled and monitored portion sizes of foods.

They more frequently engaged in healthy eating behaviors including acting as a role model, making healthier foods more available and setting rules about food and eating in their family. Parents perceived fewer barriers to engaging in physical activity, and more often encouraged and participated in physical activity on their own or with their family members. 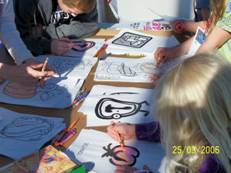 The Tem-Bel Health and Wellness Coalition implemented the CATCH Kids Club Curriculum—designed for children in grades K–5 in after-school or summer-care settings to encourage healthier dietary and physical activity behaviors—five times through Project Focus at four local schools, as well as another school (Kennedy Powell).

Forty-five students met once per week at most settings, but they met two times per week at one school setting. Overall, the participants said that they enjoyed the curriculum and especially enjoyed the physical activity lessons.

The site modified the 10-lesson curriculum that focuses on helping 11–13-year-olds understand the connections between media and health by picking and choosing the lessons that were most appealing to the kids or met the needs of the facilitators.

The Tem-Bel Health and Wellness Coalition began two implementations through Project Focus; participants met once per week. No data were available for analysis.

S.M.A.R.T., developed by child health and behavior researchers, is a third and fourth grade classroom curriculum designed to motivate children to reduce screen time. Intended to be used over the course of the school year, S.M.A.R.T. includes all the lesson plans and tools needed to implement the program.

The Tem-Bel Health and Wellness Coalition attempted to implement S.M.A.R.T. by adapting the curriculum and offering it in an after-school setting; however, the participants were reluctant to engage in the lessons due to the amount of information to “learn.”

Participants met once a day and particularly enjoyed an activity in which they were asked to draw things that they like to do besides watch TV and play video games. The facilitation of this program in a non-school setting was not as successful as the site would have hoped.

The Tem-Bel Health and Wellness Coalition implemented S.M.A.R.T. at the Wilson Recreation Center in March 2006. This setting was more conducive to completion of the program with a more favorable response to the after-school setting. An analysis of 22 respondent surveys suggested positive movement toward a We Can! objective related to screen time behaviors. This was not statistically significant.