The Laboratory of Chromosome Dynamics and Evolution, led by Dr. Takashi Akera, uses mouse oocyte system to reveal both the cell biological basis and evolutionary consequences of meiotic drive, where selfish genetic elements violate Mendel's Law of Segregation to increase their own rate of transmission.

One of the fundamental rules in biology is Mendel’s Law of Segregation, which states that two alleles of a gene have an equal chance to be transmitted to gametes. Such segregation will result in the typical 3:1 phenotype ratio as in Mendel’s experiments with garden peas. However, this law can be violated by selfish genetic elements, which exploit meiosis to increase their own rate of transmission. This genetic cheating in meiosis, meiotic drive, potentially occurs whenever haploid gametes are produced from diploid parents, a process inherent to all sexually reproducing eukaryotes. Female meiosis provides an opportunity for genetic elements to cheat because of the highly asymmetric cell division: only chromosomes segregated to the egg are transmitted to the descendants, while the rest are degraded in polar bodies (Fig. 1). Meiotic drive impacts genetics, evolution, and fertility, as selfish elements distort transmission ratios of linked genes and allele frequencies in populations and manipulate gamete production. Also, meiotic drive is typically associated with fitness costs to individuals that carry selfish elements. Using mouse oocytes as a model, the laboratory of Chromosome Dynamics and Evolution, led by Dr. Takashi Akera focuses on both the cell biological basis and evolutionary consequences of meiotic drive. Elucidating how selfish elements exploit the asymmetry in female meiosis will also provide a deep understanding of female meiosis itself, which is error-prone, causing fertility issues in humans. Therefore, the lab also studies basic chromosome segregation “rules” in oocytes, which can be exploited by selfish elements.

The lab has established the first experimental system for centromere drive in mice, leading to three major advances. First, we showed that centromeres with expanded satellite repeats act selfishly to preferentially orient towards the egg pole of the meiotic spindle to remain in the egg (Fig. 1 and 2A). Second, we found that CDC42 GTPase signaling from the cell cortex regulates microtubules (MTs) to induce asymmetry in MT tyrosination within the spindle and that non-Mendelian segregation depends on this asymmetry (Fig. 2B). Third, we demonstrated that high MT-destabilizing activity confers selfishness to centromeres. Centromeres incorporate both MT-binding and counteracting MT-destabilizing activities: the former attaches chromosomes to the spindle, and the latter promotes re-orientation of incorrect attachments to prevent segregation errors. Selfish centromeres exploit the same destabilizing activity, by selectively promoting re-orientation to bias their segregation to the egg (Fig. 2C). Together, these findings provided first insights into how selfish mouse centromeres exploit the inherent asymmetry in female meiosis to challenge Mendel.

Because centromere-MT interactions have been extensively studied, models for how centromeres can cheat to bias their segregation are relatively intuitive. However, other driving loci reside outside centromeres, and mechanisms for their non-Mendelian segregation and causes of their fitness costs are completely unknown, except for one example in maize. Another major focus of the lab is to address the cell biological mechanisms of meiotic drive of non-centromeric loci and the associated fitness costs in animals. We are currently working on the selfish R2d2 locus in mice.

Meiotic drive is fundamental to sexual reproduction and has been recognized as a powerful force in genetics and evolutionary biology since first described in maize in 1942. The underlying mechanisms have long been mysterious to cell biologists. The Akera lab tackles this exciting problem, all the way from developing experimental systems to revealing how selfish elements challenge Mendel and affect fitness. Moreover, our work will lead to a deeper understanding of the interactions between chromosomes and spindle MTs. These interactions are highly error-prone in humans and a major cause of infertility, which could be caused by selfish behaviors of meiotic drivers.

Watch a rigged game of tug-of-war inside the egg cells of mammals.

Schematics of meiotic drive in female meiosis. Asymmetry in female meiosis provides unique opportunity for selfish centromeres to cheat. The spindle is positioned close to the cortex and orients perpendicular to the cortex. Centromeres (blue circles) interact with the spindle and direct chromosome segregation. Selfish centromeres (bigger blue circles) preferentially orient to the interior side of the spindle, which remains in the egg.

Cell biology of centromere drive. (A) Crossing different mouse strains generates a hybrid with a difference in centromeres within the bivalent. Larger centromeres with expanded satellite repeats act selfishly over smaller centromeres. (B) Spindle asymmetry depends on active CDC-42 at the polarized cortex. (C) A model for biased orientation of selfish centromeres. Orientation is initially random (i). However, selfish centromeres (bigger blue circles) preferentially destabilize MT attachments with the cortical side (green lines) and detach (ii), leading to biased flipping to the egg side (yellow lines), and biased orientation (iii).

Mouse oocyte cells extruding the polar body, which is an evolutionary dead end for chromosomes. 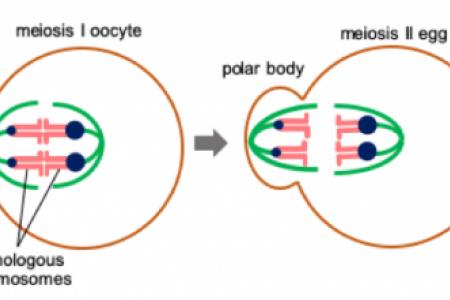 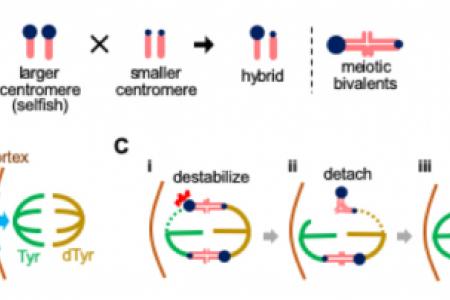 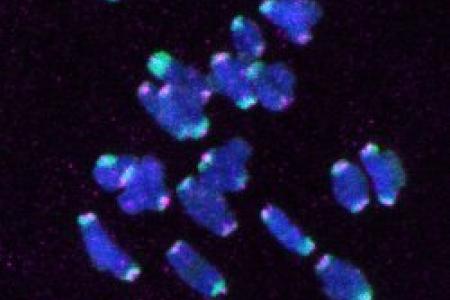 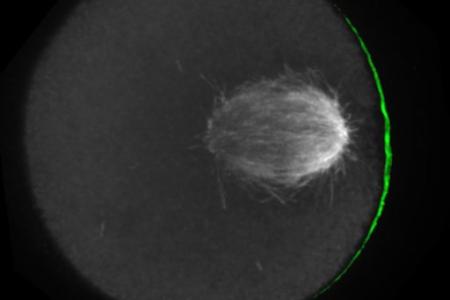 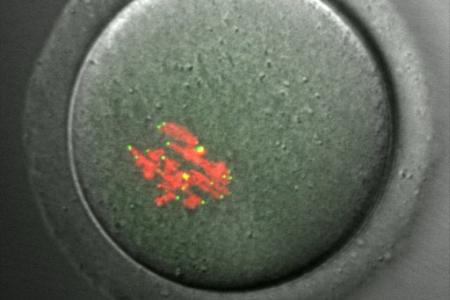 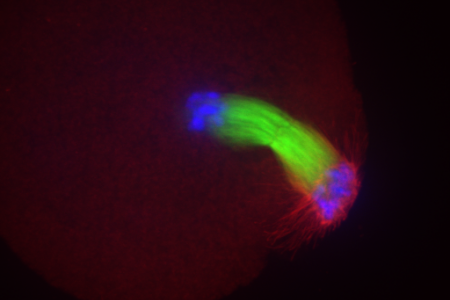 Unravelling the mystery of female meiotic drive: where we are.

Chromosome Segregation: Poor Supervision in the Early Stage of Life.