His story: Chris Sweet, 47, refuses to let sickle cell disease (SCD) stop him from living a full life. When he’s not working at his job as a computer administrator at a college in Las Vegas, Nevada, he’s busy at home with his wife and three children. He exercises, enjoys traveling, and actively supports and advocates for others with SCD. To see him today, you’d never suspect his journey was once filled with pain and struggle. He missed work frequently because of his illness and at one point had to stop working altogether. He carried around an oxygen tank. He underwent frequent hospitalizations due to pain crises, broken bones, infections, and strokes that collectively took him near the brink of death. But about 10 years ago, Sweet took a bold step: he underwent a bone marrow transplant at the National Institutes of Health. The procedure allowed his body to produce healthy red blood cells rather than sickled cells – and it gave him a new chance. Today, healthy and happy, Sweet says he hasn’t looked back.

His motivator: “I want to be here for my three girls. I want them to grow up with a strong, male role model. And one day, I would like to see them go to college and walk at least one of them down the aisle – and maybe even see grandkids.”

Turning point: “After the transplant, my quality-of-life improved 100 percent. Aches and pains were not such a big deal anymore. I had energy that I never knew existed. One of the best things is that I was able to go back to work. And I haven’t had a sickle cell crisis since.”

His call to action: “I would like to see more efforts aimed at addressing the personal needs of men with sickle cell disease. Men tend to hide the fact that they have this disease. We need to talk more about the special challenges we face – with dating, finances, new medications, and work opportunities. Women with the disease tend to have stronger support groups, but we also need strong support.”

How he’s doing his part: “I decided I had some useful things to share about how to take care of yourself while living with this disease,” he said. So Sweet and a friend recently started an online support group for men with SCD. It was formed in collaboration with Bridging the Gap, a support program of the Adult Sickle Cell Foundation of Nevada and has gained a small but steady following.

His life philosophy: “Every day is a gift. Some days are going to be better than other days. There’s never going to be a perfect day, every day. That’s how we should look at life. And that’s how it is with sickle cell disease. It’s all about how you handle it.” 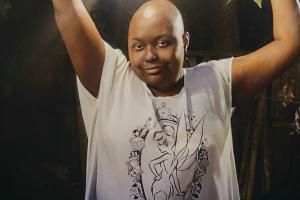 There are no Next Posts to display.