The overarching goal of the Laboratory of Stem Cell and Neurovascular Research, led by Dr. Yoh-suke Mukouyama, is to uncover the molecular control of the morphologic processes underlying the branching morphogenesis and patterning of the vascular and nervous systems.

Branching morphogenesis is a fundamental attribute of many organ systems. The overarching goal of Dr. Mukouyama’s laboratory is to uncover the molecular control of the morphologic processes underlying the patterning of tubular branching networks, particularly the vascular and nervous systems, which share several anatomic and functional characteristics, and are often patterned similarly in peripheral tissues. These characteristics suggest that there is interdependence between these two networks during tissue development and homeostasis. Thus, Dr. Mukouyama is studying neuronal influences on vascular branching patterns and vascular influences on both neuronal guidance and neural stem cell maintenance. His laboratory approaches these problems using a combination of high-resolution whole-mount imaging, molecular manipulations, advanced genetic perturbations, next-generation sequencing, and in vitro organ culture techniques.

By developing a model system of skin vasculature that allows for the direct observation of congruent vascular and neural networks in an anatomically recognizable pattern, Dr. Mukouyama and his colleagues have begun to unravel the neural control of vascular development. Their work has established two distinct developmental mechanisms: nerve-derived VEGF-A controls arterial differentiation, and nerve-derived CXCL12 controls vessel branching and nerve alignment. With a combination of high-resolution whole-mount imaging in vivo Ca2+ indicator mice, they are currently examining what happens to sensory activity in the mutants having neuro-vascular mis-patterning in developmental and pathological situations, including obesity-related nerve disorders. These studies will provide novel conceptual advances in the development and maintenance of functional neurovascular wiring.

Just as nerves influence vascular patterns in the skin, Dr. Mukouyama and his colleagues have also shown that blood vessels influence nerve patterns in the developing heart. Using whole-mount imaging, they demonstrated that sympathetic axons branch alongside large-diameter coronary veins in the sub-epicardial layer of the dorsal ventricular wall prior to innervating final targets such as coronary arteries and cardiomyocytes in the deeper myocardial layer. This novel neuro-vascular association is established by sequential expression of NGF in the subepicardial venous vascular smooth muscle cells (VSMCs) and myocardial arterial VSMCs of coronary vessels. With an ultra-high-frequency non-invasive imaging, they found abnormal cardiac functions such as irregular cardiac rhythms in the mutant embryos lacking autonomic nervous system. They are currently examining what happens to the myocardium development and conduction system architecture in the absence of autonomic nervous system and how autonomic nerves affect cardiomyocyte differentiation and maturation. These studies will provide a mechanistic framework for the functional consequence of sympathetic innervation in the developing heart.

No examination of neurovascular interactions could neglect the brain. The vasculature component of this specialized niche microenvironment helps to retain neural stem cell potential. Dr. Mukouyama and his colleagues have also found that brain vasculature influences unique distributions of embryonic macrophages including parenchymal microglia, as well as non-parenchymal meningeal and perivascular macrophages. They are currently examining how embryonic macrophages regulate radial glial cells, the primary source of cortical neurons in early brain development. These studies will provide insights into understanding the molecular and cellular basis of the neuro-vascular-immune interactions in the developing brain.

These three independent but thematically interrelated projects provide unique opportunities to advance understanding of the dynamic features of both vascular and neuronal branching networks.

Using the Prox1-GFP BAC transgenic reporter (green) and immunostaining with antibodies to lymphatic markers LYVE-1 (red) and pan-blood vessel marker PECAM-1 (blue), we have carried out whole-mount imaging of dural lymphatic vasculature at postnatal stages. We have found that between birth – postnatal day 13 (P)13, lymphatic vessels extend alongside dural blood vessels from the side of the skull towards the midline. The image was published in Developmental Dynamics (Izen et al. Dev Dyn 247:741-753, 2018).

Cardiac sympathetic axons (green) follow VSMC-associated large-diameter coronary vessels in the subepicardium of the dorsal ventricular wall of the developing mouse heart. The image was selected as the cover of the issue in Development (Nam et al. Development 140: 1475-1485, 2013).

Intra-neural hemorrhage in the brain: a mouse model of human CCMs

The vascular lumen appears to have ruptured resulting in hemorrhage in conditional mutants as evidenced by erythrocytes (green) outside the vessel enclosure (red). The image was published in Human Molecular Genetics (Cunningham et al. Hum Mol Genet 20: 3198-3206, 2011)

Whole-mount triple immunofluorescence analysis of forelimb skin of .5 embryos was performed with antibodies to  (green) in combination with the pan-endothelial cell marker PECAM-1 (blue) and the vascular smooth muscle cell (VSMC) marker alpha SMA (red). By .5, arterial vessels are densely covered with VSMCs, whereas less or no VSMC coverage occurs in venous vessels.  expression is restricted to the venous vasculature. No expression is detectable in the arterial and lymphatic vasculature. The image was published in Developmental Dynamics (Li et al. Dev Dyn 2013).

The image will be published in the Journal of Thoracic and Cardiovascular Surgery (Sandeep et al. J Thorac Cardiovasc Surg. 2015).

Some pericytes are of hematopoietic origin in embryonic skin vasculature

We discovered that the developmental sources of dermal pericytes are heterogeneous and a portion of dermal pericytes has a hematopoietic/myeloid origin. Confocal image obtained from fate-mapping experiments using embryo that have pan-hematopoietic Vav-Cre and R26R-EYFP reporter demonstrates that some NG2+ pericytes (red) associated with PECAM-1+ blood vessels (blue) are also EYFP+ (green), sugesting that EYFP+NG2+ pericytes originate from hematopoietic cells. The image was published in Cell Reports (Yamazaki et al. Cell Rep 2017). 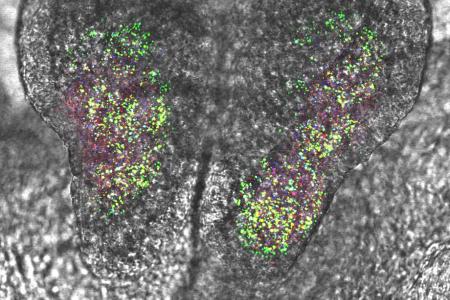 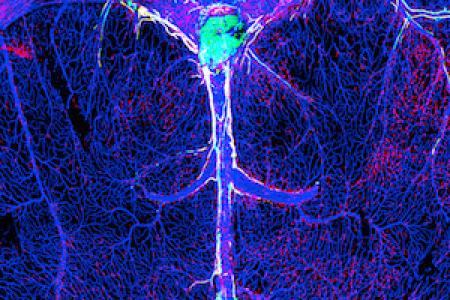 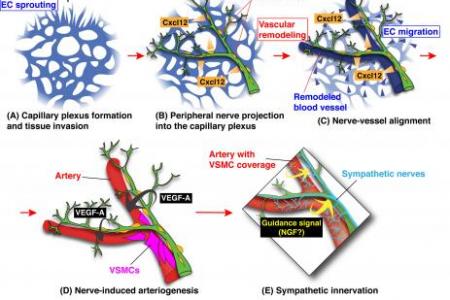 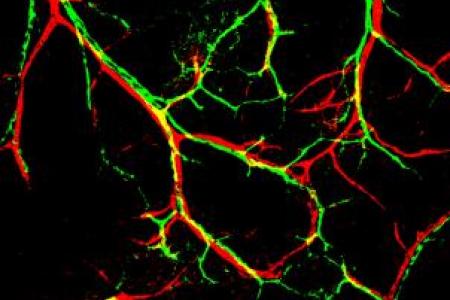 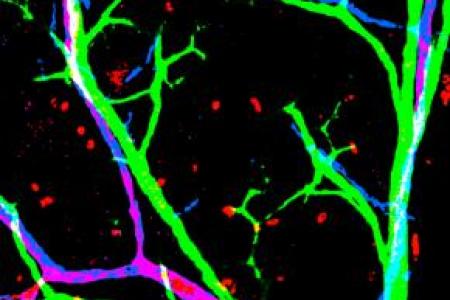 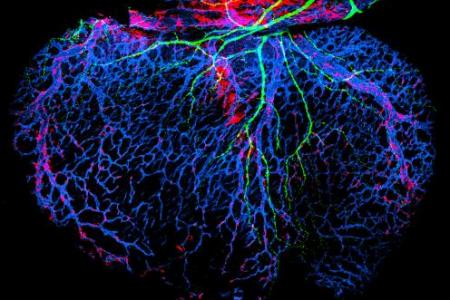 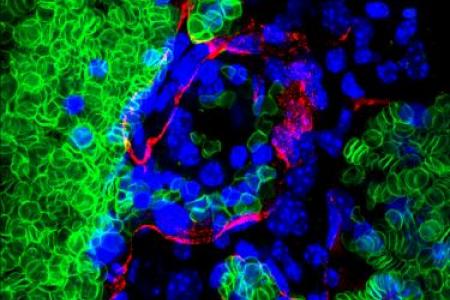 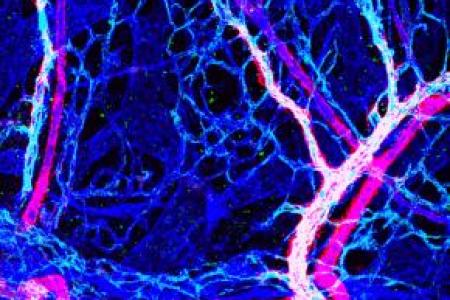 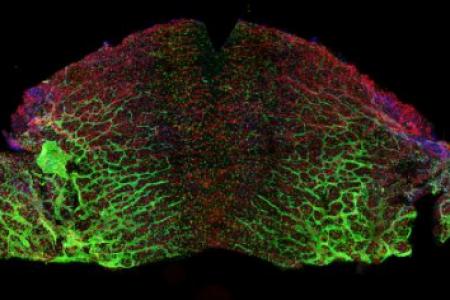 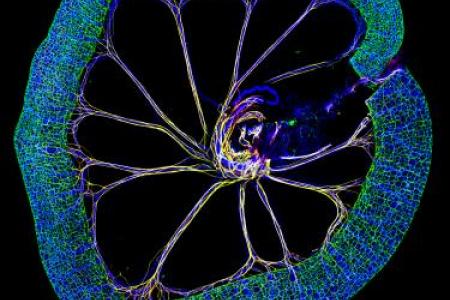 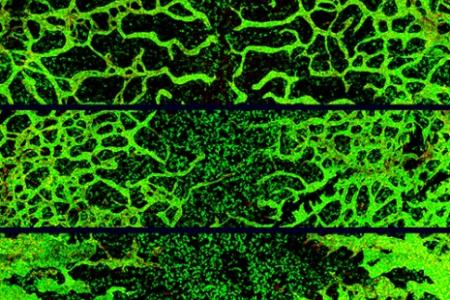 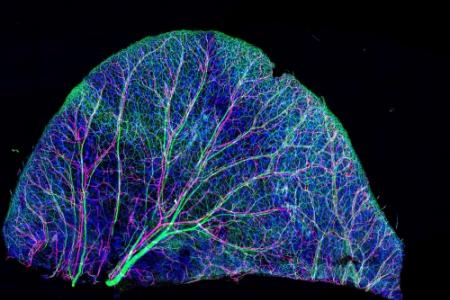 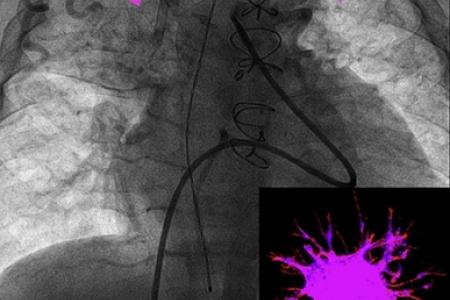 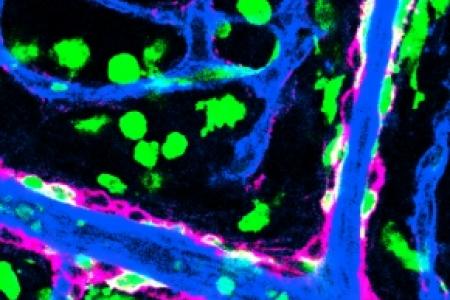 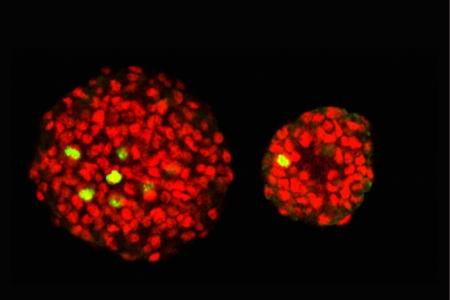 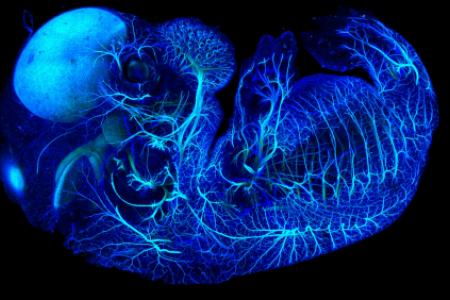 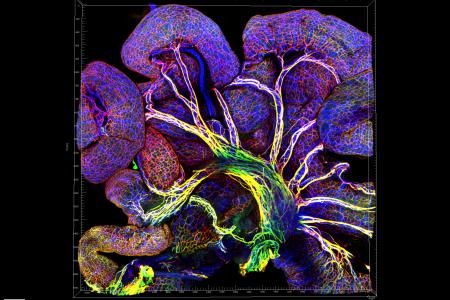 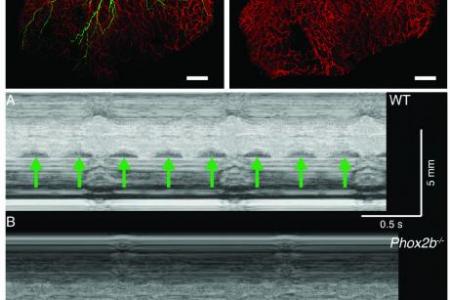 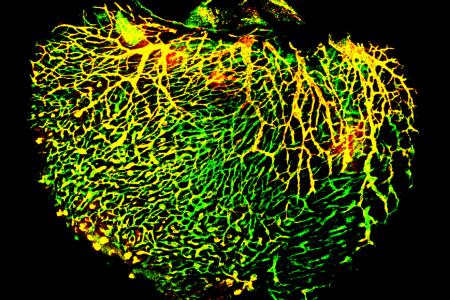 The Beauty and Complexity of Blood Vessel Patterning.

Alterations in the spatiotemporal expression of the chemokine receptor CXCR4 in endothelial cells cause failure of hierarchical vascular branching.

Yoh-suke Mukouyama, whose legal name is Yosuke Mukoyama, publishes as Yoh-suke Mukouyama. He received his A.B. in pharmacy studies from Tokyo University of Science and his M.S. and Ph.D. in developmental biology from the University of Tokyo. As a student in the laboratory of Atsushi Miyajima, he studied the properties of embryonic endothelial cells and hematopoietic stem cells (HSCs). He did postdoctoral research in the laboratory of David Anderson at the California Institute of Technology where he demonstrated that peripheral nerves direct arterial organization and formation by secreting VEGF; he also studied the properties of neural stem cells (NSCs). Dr. Mukouyama joined the NHLBI as a tenure-track Investigator in 2006. He also serves on the editorial board of Developmental Dynamics and is a member of the International Society for Stem Cell Research and the North American Vascular Biology Organization.

A postdoctoral fellow position is available in Laboratory of Stem Cell and Neuro-Vascular Biology, Genetics and Developmental…

Learn more and apply
Post-baccalaureate and Graduate students If you are looking for a Post-baccalaureate IRTA position or graduate student position in the GPP program (e.g. NIH-Oxford/Cambridge Scholars Program), please contact me with your previous research experiences. We can set up a time to meet or SKYPE. I look forward to your motivation and enthusiasm about research!

Visiting Fellow
2009 - 2014
Izumi Onitsuka, Ph.D. is currently a Postdoctoral Associate, Department of Animal and Avian Sciences at University of Maryland.

Visiting Fellow
2007 - 2008
Bon-Nyeo Koo, M.D., Ph.D. is currently a Professor in the Department of Anesthesiology at Yonsei University College of Medicine, Korea.

Guest Researcher from Colgate
2015 - 2015
David Kim is currently a Program Coordinator at The San Francisco Foundation.

Summer Student from GW
2012 - 2015
Aparna Sajja is currently a completing the accelerated seven-year BA/MD track at The George Washington University.

Summer student from UM
2009 - 2009
Charity Lee is currently a Medical student at University of Miami Miller School of Medicine.

Postbaccalaureate IRTA
2017 - 2019
Nathan Burns is currently a Graduate Student in the Molecular Biology Program at University of Utah.

Special Volunteer/Postbaccalaureate
2018 - 2019
Mishal Rao is currently a Graduate Student in the Integrative Systems Biology Graduate Program at University of Pittsburgh School of Medicine.