The Laboratory of Cell and Tissue Morphodynamics, led by Dr. Clare Waterman, has made pioneering discoveries into the complex and dynamic mechanical interactions between organelle systems within cells that are required for directed movement.

The process of directed cellular movement is of critical importance to human health, as is observed when immune cells seek out infected tissues or metastatic cancer cells invade new organs. Dr. Waterman has made pioneering discoveries into the complex and dynamic mechanical interactions between organelle systems within cells that are required for directed movement. Her laboratory established that the two classes of cytoskeletal polymers—microtubules and filamentous actin (f-actin)—exhibit both direct structural interactions and regulatory interactions mediated by Rho GTPases; she also developed specific technologies, including quantitative fluorescent speckle microscopy (qFSM) to systematically dissect the critical features of these interactions.

When cells move directionally through the extracellular matrix (ECM) of complex glycoproteins that make up their environment, they do so by protruding their surface membrane in the direction of migration, forming stable focal adhesions of the protrusion to the ECM, pulling against the adhesion to move the cell body forward, and dissolving the older adhesion sites at the back to retract the rear edge. When integrin receptors on the cell surface bind to glycoproteins in the ECM, this generates signals that regulate the speed and direction of migration. Dr. Waterman is now focused on integration of the actin dynamics in the cell with the integrin signals from the ECM that direct cellular motility, which places her firmly at the intersection of two scientific focus areas.

Integrin signaling has been intensely studied by biochemists who tease apart the key features of glycoproteins that sit, for example, on the surface of white blood cells. However, integrins function not simply to transduce signals across the cell membrane; Their operation is inseparable from the dynamical forces of movement that are generated in the actin cytoskeleton. Very little is known about the dynamics of integrins, their linkage to the cytoskeleton, and how that link is tuned according to different cellular states.

To address these questions, Dr. Waterman’s laboratory uses a variety of advanced techniques that allow them to study cytoskeletal and adhesion dynamics, and measure minute forces. For example, the use of traction force microscopy allows Dr. Waterman to measure the forces between the cell and the ECM while fluorescence speckle microscopy allows her to measure protein dynamics. By correlating the forces with protein dynamics under different molecular perturbations, Dr. Waterman can bridge the intellectual gap between molecular signaling and physical changes that are the final effectors of movement.

In a paper published in Nature in 2010, Dr. Waterman and her colleagues took advantage of three-dimensional super-resolution fluorescence microscopy to describe for the first time, at the ultrastructural level, the blueprint for how proteins in focal adhesions are organized. They can now use this blueprint to explore the relationships between molecular perturbations, physical relationships, and force capabilities. Dr. Waterman is also applying proteomic approaches to identify critical regulators of force adhesion dynamics.

Key to Dr. Waterman’s approach is a willingness to embrace interdisciplinarity to solve complex biological problems. Her laboratory includes cell biologists, physicists, mathematicians, engineers, and mouse geneticists, which she views as critical to achieving her research goals. 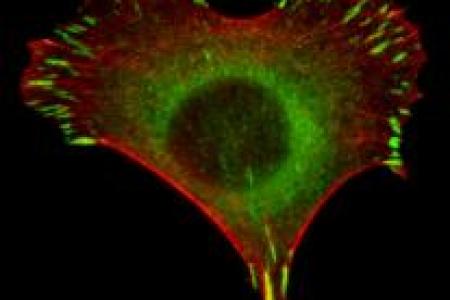 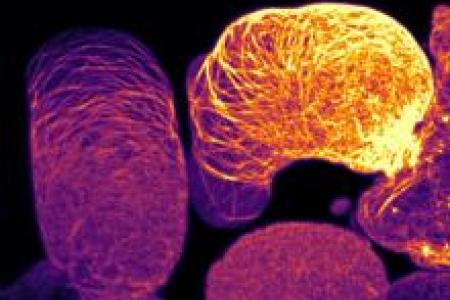 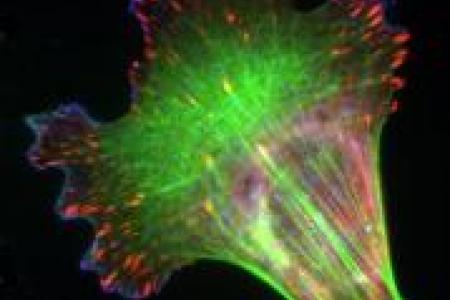 Mechanical integration of actin and adhesion dynamics in cell migration.

Clare Waterman graduated from the Mount Holyoke college with a B.A. in biochemistry in 1989, received an M.S. in exercise science in 1991 from the University of Massachusetts, and received her Ph.D. in cell biology from the University of Pennsylvania in 1995. Prior to joining the NHLBI, she spent 9 years as a professor in the Department of Cell Biology at the Scripps Research Institute in La Jolla, CA. Dr. Waterman is a NIH Distinguished Investigator and has received numerous awards and honors for her work, including election in 2018 to the National Academy of Sciences. Dr. Waterman has made fundamental advances in the understanding of role of the cytoskeleton in cell movement and morphogenesis and has authored or coauthored more than 135 papers. She currently serves on the editorial boards of Current Biology and Journal of Microscopy. Dr. Waterman is a member of the American Society for Cell Biology, Royal Microscopical Society, Biophysical Society, and is a Council Member of Gordon Research Conferences Organization.