The Laboratory of Cardiovascular Regenerative Medicine, led by Dr. Manfred Boehm, is focused on identifying and better understanding the molecular mechanisms underlying human vascular diseases with the goal of developing new therapeutic approaches.

On This Page
More Information
View Clinical Trials From This Lab

The Laboratory of Cardiovascular Regenerative Medicine has established the Patient-Centered Vascular Translational Program to conduct research on clinically relevant questions focused on vascular injury, remodeling and repair, and to translate research findings into the development of new therapeutic strategies.

The aims of the Vascular Translational Program align with the principles of precision medicine, investigating how individual variations in genes, environment, and lifestyle contribute to vascular disease. This program was designed to link high-throughput sequencing data with molecular disease mechanisms to facilitate the development of targeted therapies and through this program, we have already successfully identified the genetic cause and/or underlying mechanism of a variety of rare diseases.  We are particularly interested in investigating the mechanisms of vascular remodeling triggered by injury or other perturbations such as dysregulated homeostasis, inflammation, calcification or endothelial dysfunction. We believe that improving our understanding of these processes will help us find solutions for disease mitigation and restoring the balance of the relevant biological processes.

Development of in vitro and in vivo vascular disease models

This versatile system can be used for screening approaches, including high throughput sequencing, loss- and gain-of-function studies, and in vitro/in vivo disease modeling to identify disease-causing genetic variants and associated signaling pathways. Patient-specific hiPSCs and their derivatives can be further used to test drugs or small molecules for the development of new therapeutic strategies in culture or in-vivo models such well-established teratoma and/or 3D organoid systems.

Through a variety of murine models, including vein grafting, arterial wire injury, hindlimb ischemia and myocardial infarction, we can investigate vascular remodeling mechanisms as well as the effects of biochemical/ iPSC therapies. This approach is complemented with the use of a wide range of cell culture lines (standard cell lines, patient-derived primary and iPSCs) and cutting-edge techniques of co-culture and 3D printed structures in parallel with large scale Omics studies including single cell RNA sequencing, proteomics and metabolomics.

Arterial Calcification due to Deficiency of CD73 (ACDC)

The Cardiovascular Regenerative Medicine Lab was part of the team who identified the genetic cause of ACDC in 2011. This is an autosomal recessive disorder caused by biallelic mutations in the gene ecto-5-prime-nucleotidase (NT5E) encoding CD73, a protein that functions in extracellular ATP metabolism converting AMP to adenosine. ACDC patients develop arterial calcifications in the lower limbs as well as small joint capsules of the hands and feet. Primary fibroblasts from ACDC individuals show markedly reduced expression of NT5E mRNA, CD73 protein and complete loss of enzyme activity.

ACDC patient-specific iPSC and their derived iMSCs display increased alkaline phosphatase activity and can become calcified both in vivo and in vitro. They also display a compensatory upregulation of TNAP leading to insufficient production of adenosine and a marked decrease in pyrophosphate (PPi), which likely causes the vascular calcifications observed in ACDC patients. Using an ACDC patient-specific hiPSC model, we were able to identify an inhibitory pathway downstream of the A2B adenosine receptor signaling pathway and several therapeutic drug targets that led to a treatment clinical study in ACDC patients with sodium etidronate.

AD-HIES is a rare immunodeficiency affecting fewer than 1 per million people worldwide that presents early in childhood with multiple life-threatening infections, such as recurrent staphylococcal abscesses and pyogenic pneumonias. Later in life, other abnormalities outside the immune system become evident. As opposed to complete tissue healing experienced by otherwise healthy patients after pneumonia, aberrant healing often occurs in AD-HIES patients, gradually destroying the lung parenchyma. Additionally, skeletal and connective tissue abnormalities including facial dysmorphism, osteoporosis, bone fractures, scoliosis and joint hyperextensibility are frequent in AD-HIES patients. Vascular abnormalities include arterial tortuosity and abnormal dilatation and aneurysms of medium sized arteries, all of which can lead to potentially fatal complications such as myocardial infarction and subarachnoid hemorrhage.

The mystery surrounding the multisystem presentation of AD-HIES was partially clarified when, in 2007, the genetic cause of AD-HIES was identified as dominant-negative mutations in the STAT3 gene. This transcriptional factor has multiple targets playing crucial roles in basic cellular functions, and is widely expressed in multiple tissues and representing a major hub integrating and transducing signaling withing and between intracellular signaling pathway [1].

By applying patient specific disease modeling, next generation sequencing and signaling pathway analysis, we revealed major abnormalities in angiogenic, tissue remodeling and wound repair responses in AD-HIES patients driven by deficiencies in HIF1α signaling [2, 3, 4]. By demonstrating therapeutic benefit of HIF1α stabilizing drugs in these models, we identified a novel treatment option that is currently in late development stages for renal anemia, which can also be used for this rare disease off-label [4].

SAVI is a gain-of-function of TMEM173-encoded protein STING associated autoimmune and vascular disease, in which patients present with early-onset (as early as 8 weeks of age) systemic inflammation, cutaneous vasculopathy, and pulmonary fibrosis. STING is a single string DNA sensor and is expressed not only by immune cells but also by vascular endothelial cells. Our studies have shown that overactivation of STING leads to chronic activation of the interferon pathway and endothelial dysfunction. Further, we observed micro thrombotic vascular changes in chronic skin lesions from patients, with vascular inflammation present in capillaries but not medium or large size vessels. We also found that markers of endothelial inflammation (inducible nitric oxide synthase), coagulation (tissue factor), and endothelial-cell adhesion and activation (E-selectin and intercellular adhesion molecule 1) were upregulated in vascular endothelial cells in SAVI patients. This points to a STING-induced EC dysfunction mechanism that may instigate an inflammatory and vaso-occlusive process localized to specific vascular beds.

The mechanisms of how STING activation regulates endothelial cell (EC) function and how EC dysfunction contributes to patient phenotype, particularly interstitial lung fibrosis, remain currently unknown and are our main focus. We have generated SAVI patient-specific iECs for an in vitro disease model, in which we have established endothelial dysfunction phenotype and have successfully rescued endothelial function by CRISPR CAS9 mediated gene editing strategy. We are currently working on high throughput sequencing data analysis  to furth reveal the signaling pathways leading to pulmonary fibrosis and we hope to identify potential therapies for clinical trials for SAVI patients.

We have previously found that TNFa is significantly increased in DADA2 patients and anti-TNF treatment may help reduce strokes in DADA2 patients. How the loss of ADA2 function in myeloid cells leads to vascular endothelial injury and to strokes remains far from clear. We have generated DADA2 patient-specific iMLCs and have differentiated them to different macrophage subtypes (M0, M1 and M2) by the M-CSF method in order to develop an in vitro disease model to further investigate the disease mechanisms. We continue to use this iPSC platform to investigate how myeloid/endothelial cels interact to mediate vascular injury in DADA2 patients.

Other Diseases with Unknown Mechanism

Degos disease is a poorly understood rare genetic disorder leading to defects in coagulation, in which small veins and arteries become occluded. Initial symptoms present as skin lesions for both the benign and systemic forms of the disease. However, benign Degos is limited to skin lesions, while systemic Degos progresses to other organ systems (intestines, CNS).

CADASIL (cerebral autosomal dominant arteriopathy with subcortical infarct and leukoencephalopathy) is caused by mutations in NOTCH3 and is of slow onset (initial clinical manifestations in the third and fourth decade of life) but progressive with no available cure. Predominant clinical features include strokes, early dementia, migraines, memory loss and multiple psychiatric symptoms.

Premature Coronary Artery disease (premature CAD).  Ischemic heart disease is the most common cause of death worldwide, comprising nearly 16 percent of all deaths annual. While many risk factors are known — aging, smoking, diabetes, hypertension, poor diet, lack of exercise — in some cases, the etiology remains a mystery. Is worrisome the increasing recognition of the disease in younger populations, with injury to the inner layer of a coronary artery sometimes manifesting itself as early as childhood, seemingly due to genetic causes.

We are continuously working to characterize the etiology and natural history of CADASIL, Degos and premature CAD through comprehensive clinical and molecular evaluations of patients as well as to develop patient-derived disease models to better understand the pathophysiology of these conditions.

Development of in vitro and in vivo vascular disease models

Schematic showing how patient samples are processed to develop patient-specific iPSC and derived cell lines such as induced endothelial (iEC), smooth muscle (iSMC), mesenchymal (iMSC), monocyte (iMono) and dendritic (iDC) cells. These can be further used in teratoma and vascular organoid (VO) models of disease and they can also be genetically corrected to develop isogenic controls.

Arterial Calcification due to Deficiency of CD73 (ACDC)

Schematic showing how patient samples are processed to develop patient-specific iPSC and derived cell lines such as induced endothelial (iEC), smooth muscle (iSMC), mesenchymal (iMSC), monocyte (iMono) and dendritic (iDC) cells. These can be further used in teratoma and vascular organoid (VO) models of disease and they can also be genetically corrected to develop isogenic controls.

By demonstrating therapeutic benefit of HIF1α stabilizing drugs in these models, we identified a novel treatment option that is currently in late development stages for renal anemia, which can also be used for this rare disease off-label.

We have generated SAVI patient-specific iECs for an in vitro disease model, in which we have established endothelial dysfunction phenotype and have successfully rescued endothelial function by CRISPR CAS9 mediated gene editing strategy. We are currently working on high throughput sequencing data analysis  to furth reveal the signaling pathways leading to pulmonary fibrosis and we hope to identify potential therapies for clinical trials for SAVI patients.

Extracellular adenosine is derived sequentially from ATP, ADP, and AMP through CD39 and CD73. 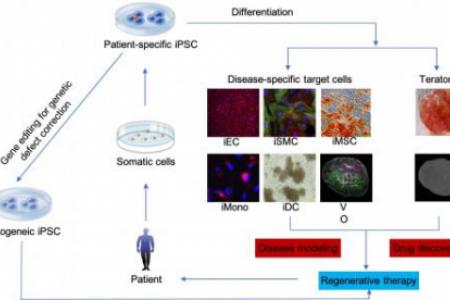 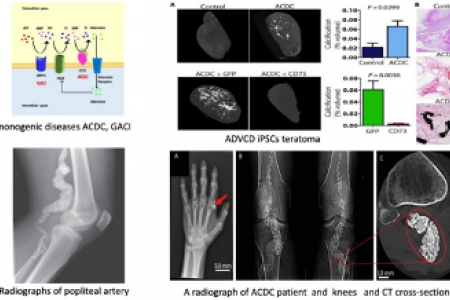 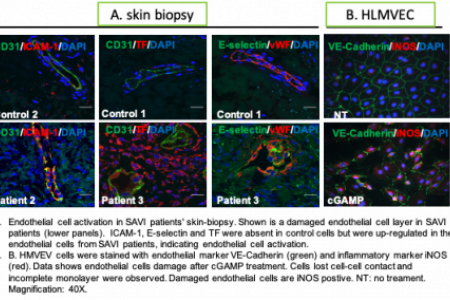 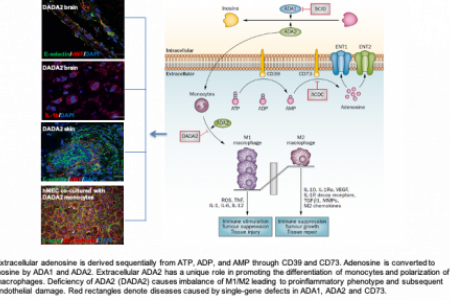 Mutations that prevent caspase cleavage of RIPK1 cause autoinflammatory disease.

Manfred Boehm received his M.D. in 1993 from the University of Heidelberg, Germany and did his residency in internal medicine at the Franz-Volhard-Clinic, Berlin. Before arriving at the NIH and NHLBI, he was a research fellow at the Max Delbrück Center for Molecular Medicine, Berlin from 1996 to 1997, and the University of Michigan, Ann Arbor from 1997 to 1999. He joined NHLBI as a research fellow in 1999 and has been an Investigator since 2003. Dr. Boehm received a Foundation for Advanced Education in the Sciences Award for Research Excellence from the NIH. He was also the recipient the NHLBI Science Awards in 2015 for his team’s research on rare inherited vascular diseases in children. Since 2018, Dr. Boehm has been the Branch Chief of the NHLBI Translational Vascular Medicine Branch, which focuses on studying vascular disease mechanisms to develop novel treatment strategies to better serve our patients with vascular diseases through genomic and molecular high throughput approaches to help understand diseases processes in common and rare inherited disease populations.