Nearly 4 million babies are born each year in the United States, and almost all are screened for numerous conditions, including rare, potentially life-threatening diseases that could affect their hearts, lungs, and blood. Doctors and researchers have long agreed that these tests save lives by allowing early detection and treatment.

Yet worldwide, most newborns—100 million of 137 million born annually—get no screening at all. With over 6,000 rare diseases affecting the newborn and pediatric population and an increasing number of treatment options for such diseases, doctors want to change that. And that’s what researchers at a North Carolina company called Baebies are trying to do.

They are developing a suite of lab-on-a-chip blood tests, each capable of quickly and accurately screening for potentially dozens of diseases in newborns, including rare diseases. The tests collect just a tiny fraction of the amount of blood now used in conventional lab tests, and the results can be read within minutes and transmitted almost anywhere with the aid of a mobile phone.

The start-up company is developing the technology with funding support from the National, Heart, Lung, and Blood Institute (NHLBI) through its Small Business Innovation Research (SBIR) program.

“We are developing accessible and affordable technology to bring the benefits of newborn screening to babies around the world,” said Vamsee Pamula, Ph.D., president of Baebies. He said the extra “e” in the company name is intentional and stands for “everyone,” signifying that every baby deserves a healthy start.

“Each screening test represents a chance to diagnose a rare disease early and potentially save the life of a baby,” said Pamula, who is an electrical engineer by training.  “About one baby born each minute goes untreated, even though often inexpensive therapies are available.”

Pamula cofounded the company in 2014 with Richard West, the company’s CEO. NHLBI SBIR support began soon afterward, and Pamula said it has been “extremely valuable” to the company’s rapid growth in the field of microfluidics. That’s the science of moving and manipulating small amounts of fluids using small, portable devices rather than large, clunky pieces of lab equipment. It is part of an emerging field that some have predicted can revolutionize medicine by providing a faster, easier, and inexpensive way to conduct tests.

In 2013, the NHLBI issued a call for researchers who could develop a microfluidic platform for the diagnostic testing of newborns, mainly because most testing platforms are designed with only adults in mind. The Institute envisioned a device that could conduct multiple analyses on a single drop of blood so that newborns would not have to be tested so often. Frequent testing can cause problems, such as iatrogenic anemia, a condition that results in depleted blood cells and can lead to serious complications such as stroke. NHLBI reasoned that a microfluidic device for blood testing could reduce blood loss in newborns and children and provide a more efficient way to monitor blood quality in these patients.

Pamula and colleagues answered the call by developing a digital microfluidic platform that combines a disposable plastic cartridge and micro-sized electronics. Their first-of-its-kind lab-on-a-chip cartridge houses all the chemical reagents needed for onsite diagnostic testing of a blood droplet. The device can be run from a computer tablet, or eventually a cell phone, to accurately analyze blood samples automatically. The results can be read within 15 minutes rather than days and the testing can be conducted at a hospital bedside and in the field. The microfluidic device also reduces the need for highly trained technicians and can potentially cut health care costs, Pamula said.

“The great thing about this test is that it’s all self-contained,” said Ronald Warren, Ph.D., an NHLBI program officer for the SBIR project and a member of the Molecular, Cellular and Systems Blood Science Branch in NHLBI’s Division of Blood Diseases and Resources. “All you have to do is collect the blood, put it in the cartridge, and hit ‘go’.”

One of the company’s first products, currently in use nationwide and internationally, is an FDA-cleared digital microfluidics platform to screen newborn blood for the presence of lysosomal storage disorders (LSDs), a group of rare, inherited metabolic diseases that are caused by enzyme deficiencies within the lysosome, an organelle that functions as the digestive system of the cell. These diseases can be identified in infants and can be fatal if untreated.

To date, the company has developed more than two dozen unique microfluidic tests, each with important clinical applications to newborns or children. Besides blood samples, the tests are also capable of analyzing other body fluids, including urine, saliva, and stool for the presence of disease.

Among the most anticipated tests is one that quickly identifies G6PD deficiency, a genetic condition that involves a defect in an enzyme called glucose-6-phosphate dehydrogenase (G6PD) that causes red blood cells to break down prematurely. It is the most common enzyme deficiency in humans, affecting an estimated 400 million people worldwide. Although the disease affects people of all races and ethnicities, it impacts African American males disproportionately—about 1 in 10—in the United States. A test to identify the disease early not only could improve health but could help reduce disparities associated with this condition, the researchers said.

As the company’s lab-on-a-chip devices are operated by a computer or by a tablet connected to a mobile network, the results of blood tests can be transmitted to virtually anywhere in the world, the researchers said. They anticipate that their tests can be used in remote areas of the world that lack access to high-tech laboratory facilities like those found in large cities, opening the door to its possible use in telemedicine. 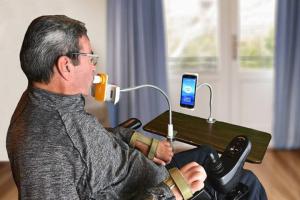