Home » Health Information for the Public » Educational Campaigns & Programs » We Can!® » Partner With Us » Local We Can! Community Programs » Case Studies » Operation Better Start

Operation Better Start is a unique partnership of diverse clinical disciplines working together to provide a coordinated framework of services to children, adolescents, and their families.

The goal of the program is to achieve positive changes in long-term health through an emphasis on healthy lifestyles, personal empowerment, and coordination of services between health care providers. 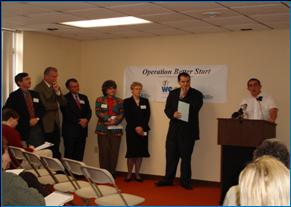 Pittsfield was highly successful in getting its community involved with We Can!. The site held four community events, including its official launch, generated media to publicize its programs and efforts, and utilized its strong connections and partnerships within the community.

In support of the launch, Pittsfield utilized live read scripts from the Toolkit, pitched to local media, and prepared a press release for launch.

The site received story placement with local Channel 9 News and newspaper articles and editorials in The Berkshire Eagle and The Pittsfield Gazette as well as publication in the SCOPE newsletter.

Before beginning We Can!, Operation Better Start site organizers had strong ties within the community. The site partnered with:

Operation Better Start was also able to rely on other existing partners such as the Pittsfield Public School System, the YMCA, Berkshire Nautilus, and Berkshire County Headstart.

Operation Better Start implemented the We Can! Parent Curriculum seven times between October 2005 and June 2006, with the majority in the spring of 2006. Forty-nine individuals, including 45 women and four men, attended the implementation in various locations including a school, a YMCA, a family home basement, Even Start, and Head Start.

“[The] Parent Curriculum was the most difficult to implement until we learned where to access the parents.” — Program Facilitator

Initially they attempted to coordinate the scheduling of the parent classes with the CATCH program. However, the parents said they wanted to watch their children doing the CATCH program rather than take a class themselves at the same time. The parent program was initially scheduled twice a week for a three-week period but scheduling varied with each implementation to meet the needs of attendees.

Parents reported increased knowledge of the principles of energy balance and also said that maintaining energy balance was easy and important to do. Parents also reported increases in healthy eating behaviors including acting as a role model, making healthier foods more easily available, and setting rules about food and eating in one’s family.

They also said they read nutrition labels more often and made foods high in fat and sugar less available. Parents also reported encouraging and participating in physical activity personally or with their family more often.

Intended to be used over the course of the school year, S.M.A.R.T. includes all the lesson plans and tools needed to implement the program. It was successfully tested with elementary schools in the San Francisco Bay Area. Operation Better Start implemented S.M.A.R.T. once at the Williams Elementary School. The implementation reached 19 students including 11 girls and eight boys.

An analysis of 16 respondent surveys found statistically significant decreases in screen time behaviors. At the end of the S.M.A.R.T. program students reported spending less time watching TV, videos/DVDs and playing video games. The analysis also suggested positive movement toward We Can! objectives related to physical activity behaviors; however, this was not statistically significant.