Home » Health Information for the Public » Educational Campaigns & Programs » We Can!® » Partner With Us » Local We Can! Community Programs » Case Studies » University of Nevada Las Vegas

The UNLV Department of Nutrition Sciences supports dietetics as a professional discipline guided by attitudes, beliefs, and a code of ethics that emphasizes the interdependence among individuals and groups in society.

Both the City of Las Vegas Department of Leisure Services and the City of Henderson Department of Parks and Recreation strive to promote and provide quality cultural and recreational experiences through diverse and innovative parks, recreation facilities and activities, and natural resource opportunities. 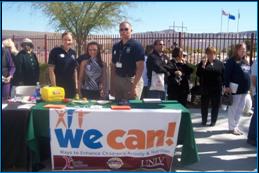 Las Vegas worked hard to integrate programming with sites in both Las Vegas and Henderson, relying on the strength of partnerships for implementation.

The sites participated in four community events that sought to educate the public about healthy eating and physical activity. These successful events attracted over 7,000 attendees and generated local media coverage.

The local television network covered the July 2005 Field Day event, and Molly Michelman, the site organizer, has been interviewed by at least four media outlets, including appearances on local television and in local newspapers.

This coverage prompted the Southern Nevada Health District to seek a partnership with the site. Ms. Michelman also secured a regular column in the Nevada Family Magazine, which is mailed to the homes of children in the Clark County School District in both English and Spanish.

The PSAs produced as part of the Media-Smart Youth Curriculum were shown on local television networks and in one of the city’s most popular movie theaters for several weeks, reaching a vast number of viewers.

The City of Henderson provided participants for the youth curricula in both the Fall and Spring and has actively recruited for the Parent Curriculum implementations. The Southern Nevada Health District (formerly Clark County Health District) provided financial support for advertising space for radio PSAs, materials, and publicity.

The Dairy Council of Utah and Nevada lent financial support for the PSAs and Media-Smart Youth materials, as well as supporting travel to a professional meeting to present data.

The University of Nevada Las Vegas television station (UNLV-TV) provided staff and produced the Media-Smart Youth PSAs as a media partner. The City of Las Vegas provided audience and event coordination for the Field Day event. The site was very excited to have Miss Las Vegas attend many of its events and share the We Can! objectives with attendees.

Las Vegas attempted to teach the Parent Curriculum in various settings and schedules, including the UNLV preschool, at UNLV during lunchtime, and on Saturdays.

One implementation met once a week for two weeks for two and one-half hour sessions in the City of Henderson in the Fall of 2005. This implementation began with five parents and ended with three parents. The second session provided child care, allowing the parents to play with their children during the stretch breaks. The site modified the curriculum to accommodate parents’ schedules but still had difficulty recruiting parents.

While coordinators noted that parents enjoyed the opportunity to exchange ideas, they also feared that the information may not have reached parents that truly needed it. When UNLV conducted a workshop with parents of UNLV preschool children they were pleased to draw over 30 attendees. No data were available for analysis.

Designed for children in grades K–5 in after-school or summer-care settings CATCH Kids Club helps children adopt healthier dietary and physical activity behaviors by positively influencing the health environments of recreation programs, schools, and homes. The field-tested materials include an Activity Box with snack recipes and physical and nutrition activities. 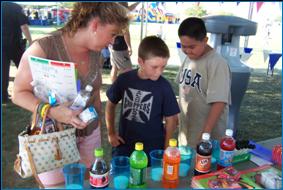 The University of Nevada Las Vegas Department of Nutrition Sciences implemented Media-Smart Youth twice at local schools. In all, 40 students including 24 girls and 16 boys participated in this 10-lesson curriculum that focuses on helping 11–13-year-olds understand the connections between media and health.

It concluded with the Big Production, where students apply their new skills to create a media project to help motivate other young people to take action for better health.

Although not statistically significant, an analysis of 14 respondent surveys suggested positive movement toward We Can! objectives related to food attitudes and physical activity knowledge.