Home » Health Information for the Public » Educational Campaigns & Programs » We Can!® » Partner With Us » Local We Can! Community Programs » Case Studies » Lane Coalition for Healthy Active Youth

Its mission is to prevent childhood obesity by mobilizing its community to adopt active lifestyles and healthful nutrition.

Working through the local youth service, LCHAY implemented youth curricula through afterschool programs with the City of Eugene Recreation Services, Willamalane Parks and Recreation, Lane County/OSU Extension Service, the YMCA, and the Boys and Girls Club. LCHAY partners were most proud of their achievements with outreach and recruitment of parents.

LCHAY conducts a multitude of community events and incorporated We Can! into five community events that ranged in audiences from 500 to 5,000 participants. LCHAY developed relationships with two local radio stations, received media coverage on their parent program, and published an article in their local paper.

The site maintained continuous contact with multiple partners that supplied them with additional resources for programming.

Finally, LCHAY conducted five community events that incorporated We Can! programming. These were:

In addition to these events, We Can! materials have been disseminated at a variety of Springfield and Eugene events and facilities, including the front counters of local youth and family service agencies.

LCHAY published an article in The Register Guard (Eugene, OR) newspaper about its program and received local media coverage of the Parent Curriculum.

LCHAY has an extensive network in place with a 110-member coalition, representing approximately 25 local agencies, institutions, or organizations.

Its partnerships were instrumental in supporting incentives, giveaways, and food for We Can! events. LCHAY tapped into its existing relationship with Safeway grocery stores to provide funding for food for the We Can! nutrition lessons and healthy snacks for both the Parent and Youth Curricula series.

During the first half of 2006, LCHAY implemented the We Can! Parent Curriculum four times at local community and swimming centers.

Forty-seven individuals—40 women and seven men, received the educational program. To recruit participants, LCHAY produced radio PSAs, a news release, a promotional flyer, and huge posters for strategic placement. The news release was picked up in the Eugene Parks and Recreation newsletter—a direct mail piece sent to all residents. It was also placed in the Springfield and local extension newspapers. The flier was distributed to the WIC program, left with food stamp offices, and distributed through schools to prom 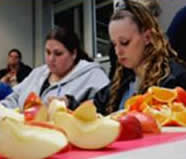 A key to the success of recruiting and retaining parents in these programs was the hiring of effective trainers/leaders that knew how to speak to parents and make the program fun.

LCHAY consolidated the parent program to four 90-minute sessions held weekly by collapsing the physical activity and screen time session into one stand-alone session; the first three lessons were completed as written.

Critical to participation and attendance at subsequent classes was the offering of incentives and prizes at the end of each session, including pedometers and a children’s cookbook. LCHAY knew the state had purchased a large quantity of pedometers and it begged its contacts to distribute the pedometers to its parent programs. Once the parents received the pedometers, they had an immediate effect with parents reporting they started exercising more because of the device.

Another effective tactic with the parent program was the location of the program at a local, state-of-the-art aquatic center. During the 90 minutes their children completed a swim class, parents were available to attend Parent Curriculum classes using a classroom located at the center.

The site’s efforts paid off in rewarding ways. As Shirley McSilvers, the site manager recalled, "There was one single mom. She did not cook and she practically lived at the pool with her daughter. While her daughter swam, the mother attended the nutrition and the We Can! series. Through this she began making healthy snacks and her daughter joined her after the swim class to help. It brought them together in the kitchen. It was a rewarding experience."

By the end of the Parent Curriculum, parents reported improved attitudes about the ease and importance of engaging in energy balance and reducing portions of higher fat foods, as well as choosing a diet higher in fruits and vegetables and lower in fat and sugar. Parents said they more often controlled and monitored portion sizes, and more often acted as a role model, made healthier foods more easily available, and set rules about food and eating in their family.

LCHAY implemented four CATCH programs in an afterschool setting four to five days a week for several weeks. LCHAY has excellent outdoor facilities and adapted or modified many of the CATCH activities to take advantage of these settings. Most of all, LCHAY wanted to make the activities fun for the kids participating.

A total of 60 students, including 32 girls and 28 boys, participated. An analysis of 39 respondent surveys found statistically significant increases in food attitudes: intentions to drink skim milk: by the end of the CATCH program youth participants reported increased intention choose fat-free or low-fat milk instead of regular milk.

LCHAY implemented Media-Smart Youth in October 2005 at a Boys and Girls Club. A total of 10 students, including three boys and seven girls, participated. Youth involved in Media-Smart Youth utilized a newly upgraded computer lab with internet and video technology made available to create the final project known as the Big Production. Using technology as a form of creative expression is a benefit to reaching this age group.

An analysis of three respondent surveys suggested positive movement on We Can! objectives related to children’s nutrition knowledge, food attitudes, and physical activity knowledge and attitudes. These were not statistically significant.