Home » Health Information for the Public » Educational Campaigns & Programs » We Can!® » Partner With Us » Local We Can! Community Programs » Case Studies » We Can!® County: Armstrong County, Pennsylvania

We Can!® County: Armstrong County, Pennsylvania

Armstrong County, which calls itself "the heart of Western Pennsylvania," has had a soft spot for We Can!–based programming since it became the first official We Can! County. Like many rural communities, Armstrong County has the challenge of offering recreational opportunities to individuals living in a large geographic area—in this case some 664 square miles. But leaders are up to the challenge, especially when it comes to helping local children maintain a healthy weight. 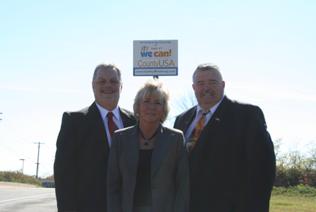 Prompted by data showing alarming rates of overweight among children in their community, the ACMH Foundation rolled up its sleeves and got down to work with We Can!. The formal launch of this first We Can! County, in September 2007, was a high–energy event that included music and physical activity for the several hundred school–age children who attended, and featured a variety of speakers—including Melissa McGowan, Public Health Advisor from the National Institutes of Health. At the event, McGowan presented Armstrong County Commissioners with the first ever
We Can! County road sign. Armstrong kept the momentum going by hosting a 2K walk for families two days following the launch. Representatives from all of the organizations partnering in the HEALTHY (Healthy Eating Active Lifestyles Together Helping Youth) Armstrong coalition, a countywide, school–based initiative, also participated in the event (see below for more details on the coalition).

Read more about the County's implementation of We Can! programming below. You can also skip ahead to each of the following topics by clicking on them.

Among its many successes influencing individual and family behavior change in the heart of Western Pennsylvania, HEALTHY Armstrong has promoted We Can! in the following ways:

Healthy Recipe of the Week: Since October 2008, HEALTHY Armstrong has been cooking up a countywide campaign to help residents understand the importance of proper food choices, nutritional content, and portion control. The group partners with several grocery stores throughout the county, offering weekly healthy recipes that are featured in a prominent grocery display. The intent is to make people aware of the We Can! program, let them know they have easy access to healthy food choices, and give them a way to prepare those foods.

Web Visibility: The HEALTHY Armstrong website, launched in April 2009, allows visitors from across the globe to learn about We Can! through HEALTHY Armstrong, allowing them access to We Can!–based resources with the click of a mouse.  You can see for yourself at www.healthyarmstrong.com

We Can! programming currently occurs in seven elementary and middle schools in Armstrong County.

Based on the We Can! CATCH curriculum, the school program began as a pilot effort in Elderton Elementary School and was so successful there that it expanded to six other schools in Armstrong County. The program includes in–classroom, afterschool, weekend, and other activities. including: 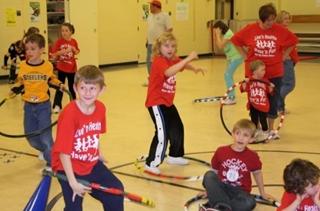 In 2010, HEALTHY Armstrong began a pilot project at West Hills Intermediate School in physical education classes that uses pulse monitors to track kids' activity levels during class. The purpose of this pilot program is to help kids learn more about their heart rates, increase physical activity levels, and understand the effect that physical activity has on their bodies. The monitors have been well received by the kids and encourage the kids to attain their target activity levels. There are plans to continue this program into the 2010–11 school year.

As mentioned earlier, HEALTHY Armstrong is a coalition comprised of many partners, including the following:

Other community partners include The Armstrong Trail, Greater Armstrong County YMCA, Belmont Complex, Penn State Cooperative Extension, and Crooked Creek Environmental Learning Center. On a side note, representatives from the UPMC Health Plan also lead We Can! efforts in nearby Pittsburgh. Read more about their efforts.

The coalition's mission is to "…improve the health of families in the community and to help children maintain a healthy weight through improved nutrition and increased physical activity." These are two key We Can! messages, and the coalition's work is based on We Can! curricula for youth and parents.

From the first day as a We Can! County, Armstrong County has gotten hearts pumping about the program by reaching out to the community and others through a number of events and activities: 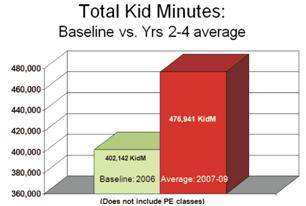 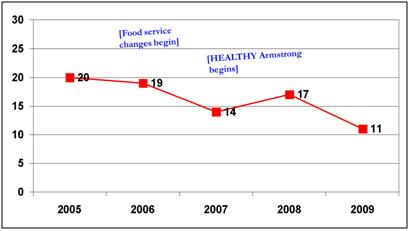 Contact Information
For more information on Armstrong’s We Can! platform, please send a letter or visit their website:

For additional contact information, send an email to nhlbiinfo@nhlbi.nih.gov.