Home » Health Information for the Public » Educational Campaigns & Programs » We Can!® » Partner With Us » Local We Can! Community Programs » Case Studies » Benton County Healthy Weight and Lifestyle Coalition

The Benton County Healthy Weight and Lifestyle Coalition, formed in December 2001, is comprised of 22 community members and partner agencies. The coalition brings together individuals, families, communities, businesses, schools, worksites, healthcare systems, organizations, and city and county governments. Together, they work to improve the health of Benton County residents and reduce the risk of chronic diseases through daily physical activity and healthy eating.

The Benton County site added We Can!® to its effort to support healthy choices through policy promotion and environmental changes in 2005. Along with its extensive coalition, Benton County provided its community with a variety of events and youth and adult education programs.

Benton County was successful at getting its community involved in We Can!—including schools, libraries, universities, and parents—to adopt the healthy attitudes and behaviors that the program promotes.

The site participated in seven community events that attracted more than 1,000 community members, generated local media coverage, and strengthened partnerships with 16 organizations in its community. These included:

Benton County placed three articles in the Corvallis Gazette-Times, issued a press release, received local radio airtime, and ran its PSA on the local cable channel for three months. The PSA included a tag line for the We Can! events. It also advertised its programs in the Corvallis Parks and Recreation activity guide. We Can! events were advertised in school newsletters.

Benton County’s site organizers were already a part of an extensive coalition with 16 partners that contributed to the success of the site’s activities and efforts.

Many members of the Healthy Weight and Lifestyle Coalition participated as We Can! partners, including the Benton County Health Department, which provided funding ($800), and the Corvallis Clinic, which provided a $100 donation for food and childcare during Parent Curriculum sessions.

In addition, Corvallis Parks and Recreation and Samaritan Health Serv 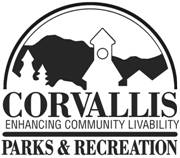 ices coordinated a meeting with Comcast to film the Media-Smart Youth® public service announcement (PSA) and provided funding to purchase broadcast time to air the PSA ($2,500) and to purchase and distribute We Can! parent handbooks and wristbands ($2,500). The Willamette Dietician Association also provided funding.

In addition to the coalition members, Benton County partnered with numerous groups including Corvallis Parks and Recreation, the Corvallis-Benton Library, and three branch libraries tocoordinate their Get Real, Get Fit community events. These events were funded through a Libraries of the Future grant. Nickelodeon TV provided a Get Real, Get Fit series videotape for the events. Benton County Extension Services of Oregon State University participated in community events and provided staff support for teaching the parent education sessions.

The Cheldelin Middle School allowed Benton County to advertise in its parent newsletter and use display cases to showcase materials that students created as part of the Media-Smart Youth Curriculum. It also provided space for class facilitation. The Invale Elementary School helped the site facilitate its Media-Smart Youth implementation.

The site received staff support from the Philomath Rural Parenting Initiative in the form of funding for meals and childcare during parent classes in rural settings. The Oregon Dairy Council provided materials for events. The Good Samaritan Foundation gave financial support for a media campaign with a local cable network (Comcast) and to purchase additional parent handbooks. The Foundation also promoted classes and events to its 1,500 employees.

Benton County attempted three implementations of the six-lesson We Can! Parent Curriculum—developed by We Can! specifically for parents and caregivers—but experienced barriers in recruitment and retention, forcing the classes to be canceled.

The site then modified the curriculum to a four-lesson program and successfully implemented it at an Even Start program with 16 female participants. To condense the program, the facilitator combined some of the lesson components to create four one-hour sessions. No parent data were available for analysis. 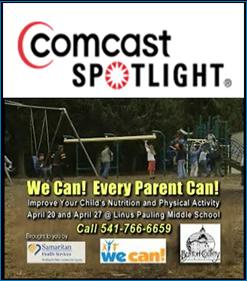 The Benton County Healthy Weight and Lifestyle Coalition implemented Media-Smart Youth—a 10-lesson curriculum developed by the Eunice Kennedy Shriver National Institute for Child Health and Human Development that focuses on helping 11–13-year-olds understand the connections between media and health—five times at three elementary schools, one middle school, and a parks and recreation center.

At all locations, a total of 87 participants met once a week for 90 minutes. Benton County involved Comcast, who filmed the PSA.

An analysis of 31 respondent surveys including 11 girls and 20 boys, from the January 2006 and April 2006 implementations at Invale Elementary School suggested positive movement of physical activity attitudes supporting We Can! objectives.