Acting U.S. Surgeon General and NIH Director Announce Expanded We Can! Efforts
Boston, Pittsburgh, and Las Vegas named as new We Can! Cities 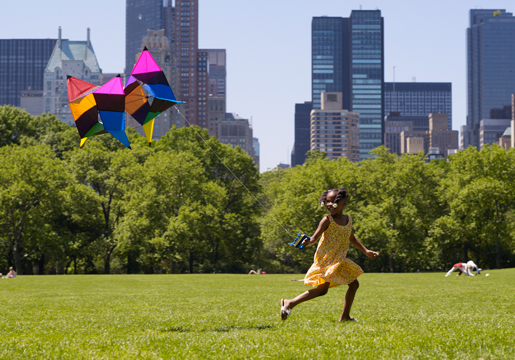 On November 27, 2007, First Lady Laura Bush introduced Acting U.S. Surgeon General Rear Admiral Steven K. Galson as chair of the HHS Childhood Overweight and Obesity Prevention Initiative, which includes the We Can! program. Two days later, Rear Admiral Galson, joined by National Institutes of Health (NIH) Director Dr. Elias Zerhouni, promoted the effort by presenting at a We Can! media event in Boston. The event included the announcement of a new partnership between the We Can! program and the Association of Children’s Museums.

The partnership will help expand We Can!'s community-based efforts to address the epidemic of childhood overweight. In addition, three major cities—Boston, Pittsburgh, and Las Vegas—were designated as We Can! Cities. Cities that commit to We Can! agree to host numerous science-based parent and youth programs for the community, provide We Can! materials and information to city employees, establish partnerships and coordinate local media and community events that promote We Can! messages. Other NIH leaders who also participated in community events at children’s museums included: National Heart, Lung, and Blood Institute (NHLBI) Director Dr. Elizabeth Nabel and Deputy Director Dr. Susan Shurin, and National Institute of Diabetes and Digestive and Kidney Diseases (NIDDK) Director Dr. Griffin P. Rodgers each participated in We Can! promotional events. 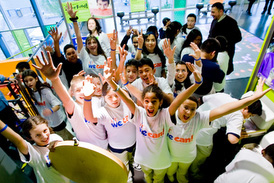 Simultaneous events were held in Boston, MA; New York City, NY; Pittsburgh, PA; Las Vegas and Carson City, NV; Memphis and Oak Ridge, TN; and Rockford, IL to bring attention to the growing success and availability of We Can! and to demonstrate how communities are implementing We Can! at the local level.

At the Boston event, Drs. Galson and Zerhouni were joined by Dr. Nabel, ACM Executive Director Janet Rice Elman, and children from the Umana Middle School Academy in East Boston. The children presented Mayor Thomas Menino with the official We Can! City sign to commemorate his city’s commitment to implementing We Can! program elements throughout Boston. Menino proclaimed November 29th as We Can! day in Boston. 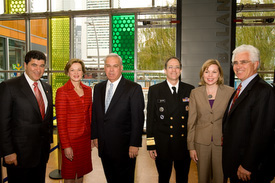 In addition, Mayor Thomas Menino proclaimed Boston as a We Can! City and described how We Can! is being implemented with community partners and sites. The event called attention to the continued epidemic of childhood overweight in America, and the great work underway in Massachusetts and around the country to address it.

Children from the Umana Middle School Academy in Boston and a Boston area family who has adopted a healthier lifestyle through We Can! participated in the press conference and in activities at the museum as well. 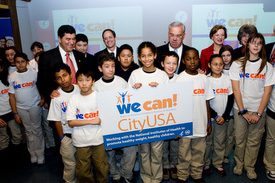 The event in Boston was capped off by Ivonne Borrero, a local parent who shared how the We Can! parent program has helped her 11-year old son manage his overweight. “Little bitty changes have really made a big difference in all of our lives,” Borrero said. She's been surprised and thrilled to see her son request a wrap sandwich, instead of a burger, during visits to the mall. He also voluntarily gave up some of the candy from his Halloween bag.

Attendees at the November event also included representatives from We Can! Founding Intensive Community Sites: Boston Steps, a program of the Boston Public Health Commission, and Pittsfield, Massachusetts-based Operation Better Start Berkshire Health Systems. In addition, partnering organizations such as the National Park Service, the Massachusetts Dietetic Association, and the American Academy of Pediatrics attended the event. 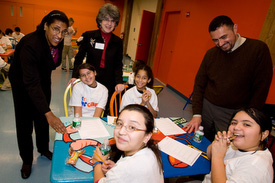 Seven other cities involved in We Can! held press events to bring attention to the growing success and availability of We Can! and to make their own announcements.

In New York City, local children and their families attended the event at the Children’s Museum of Manhattan, which featured remarks by Dr. Griffin Rodgers, director of the NIDDK. Chefs for Humanity provided a healthy cooking demonstration and the New York Road Runners Foundation Youth Events and Training Manager provided the children with tips on ways to be active while leading them in stretching exercises.

In Carson City, Nevada, Mayor Marv Teixiera held a press event in the local Children’s Museum to expand on Carson City’s commitment as a current We Can! city. During the event Mayor Teixiera announced planned programming for the year ahead, combining the efforts of the Washoe Tribe, the Parks and Recreation Department, city schools and the local health department. Sixty public school third graders and Head Start youth attended the event and practiced their physical activity to a drum beat in a Washoe Native American round dance.

Also in Nevada, the city of Las Vegas teamed up with the University of Nevada, Las Vegas (UNLV) to commit Las Vegas to becoming a We Can! City. The mayor of Las Vegas announced the city's effort before the City Council and local media. Through the We Can! City program, UNLV staff will be working together with Las Vegas Department of Leisure Services staff to provide We Can! programming and information to parents, youth, and city employees.

In Memphis, Tennessee, more than fifty students attended an event at the Children’s Museum of Memphis, where New Beginning Ministries Church, a new We Can! Intensive Site, and the museum announced their commitment to implement We Can! programs and events in 2008.

The Children’s Museum of Oak Ridge, Tennessee, held a press conference to announce the museum as a new We Can! community site. Children from the Roane County Head Start Program attended, along with representatives from the East Tennessee Children’s Hospital, a children’s museum in Knoxville; and a local health club.

In Rockford, Illinois, the Discovery Center Museum hosted after-school students for a We Can! press event. The Great Harvest Bread Company donated bread for the students to sample and the event included a discussion of the differences between taste, texture, and nutritional value of whole grain versus white breads. The students also spent time in the Museum’s Body Shop Gallery, an area of the Discovery Center devoted to the science of the human body. This event was the kickoff to a larger program that will launch in spring 2008, when the museum will integrate a nutrition program in its after school-programs at Barbour Language Academy and four additional schools.